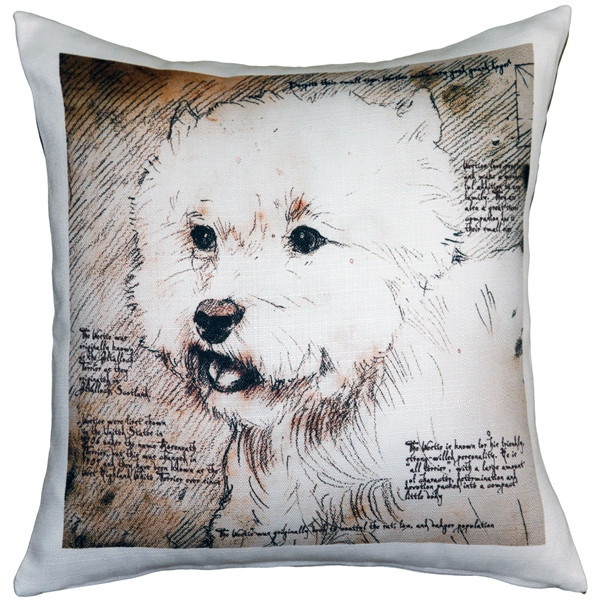 Created in the style of a Leonardo da Vinci sketch, this Westie Terrier image is applied to a wonderfully soft and natural feeling indoor/outdoor poly-linen fabric. The Westie Terrier Dog Pillow makes a great gift for anyone who owns and loves this breed. Or incorporate this pillow into your own home to celebrate the unconditional affection that your dog shares with you. A Leonardo's Dogs original.

The Westie is known for his friendly strong-willed personality. He is "all terrier", with a large amount of character, determination and devotion packed into a small compact little body. Westies love people and make a wonderful addition to any family. They are also a great travel companion due to their small size. Despite their small size, Westies make very good guard dogs. The Westie was originally bred to control the rat, fox and badger population. The Westie was originally known as the Poltalloch Terrier as they originated in Poltalloch, Scotland. The Westie was first shown in the United States in 1906 under the name Roseneath Terrier, but this was changed in 1909 and they have been known as the West Highland White Terrier ever since.